This Web-page is a set of photographs of my house which we sold to purchase Hadar, www.hadar.org.uk our new working narrowboat that we live on. My house was in a town called Walton, adjacent to Felixstowe. Although Walton was historically the original town, and is still geographically larger, Felixstowe is renown because of the Port of Felixstowe. I bought the house, called “Holmehurst” with my first wife, but following our divorce I kept the house. It wasn’t until the deaths of my parents, my mother in 1999 and my father 6 months later in 2000, that I was financially able to have extensive work done to the house to make it more sellable. Jo moved in with me late in 2000, and became very involved with the work that had to be done.
The following photos will illustrate how the house looked before work commenced, during construction of the new extension, and after it was completed, both outside and inside. The work that was carried out was as follows:-
The whole project cost £22,301.16.

The first set of photos where taken before any work was started. 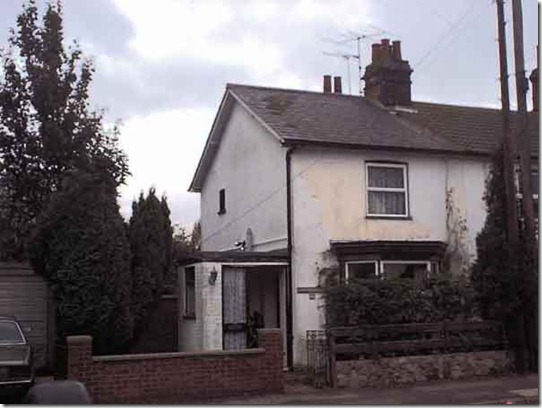 This is the front of the house as viewed from the road. The lobby can clearly be seen with it’s original flat roof, which to me did not look in character with the house, which dates from before 1876. In fact, it and next door where originally one house, which had been divided into two, and was built and originally owned by a W G Finch, the local builder in Walton, whom we believe may have built most of Walton in the 1800’s. The garage can just be seen on the left of the photo. The bay window is the lounge and the window above is the main bedroom. The tiny window seen above the lobby is at the head of the stairwell. 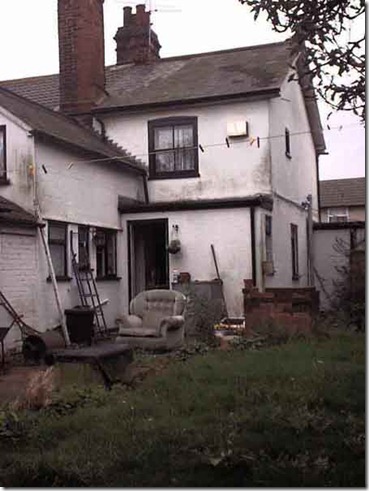 This is the rear of the house, as seen from the jungle pretending to be a garden. The door leads into the dining room, and to the left of this was the original kitchen and bathroom. The kitchen was the first of the 3 windows, the middle window was half the kitchen and half the bathroom, and the third window was the remainder of the bathroom. The room above the kitchen/bathroom is the third bedroom which was originally a hay loft, and the space underneath was originally empty and open, the kitchen/bathroom having been added somewhat later, probably when the originally house was divided into two. The window above the door and flat roof is the second bedroom. The rectangular grill next to this window is the chimney for the boiler mounted in the top of the stairwell. 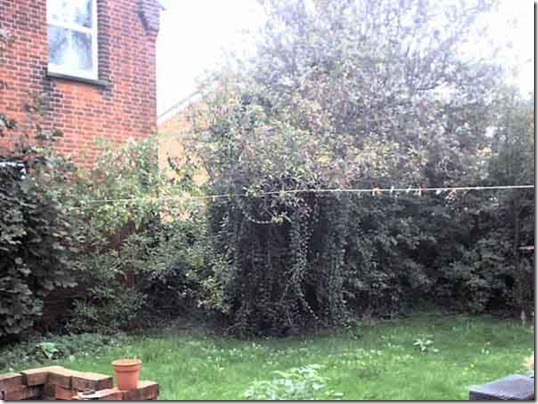 This was the “Jungle” which had taken over at least ⅓ of the garden, and was mostly trees, bushes, nettles and a lot of ivy. 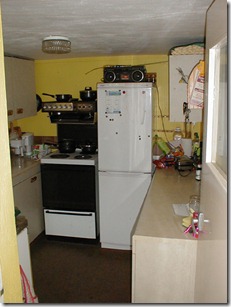 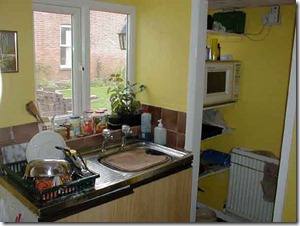 These two photos were the old kitchen, less room in there than in Hadar’s galley! 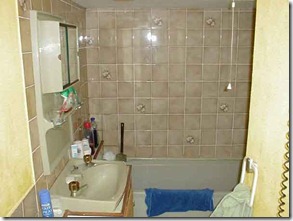 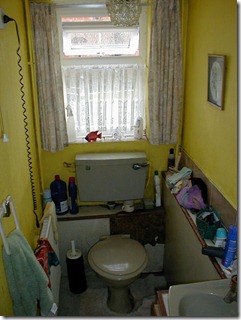 These two were the old bathroom, adjacent to the kitchen. These two rooms had very low headroom, probably about 7’ floor to ceiling, which meant there was not enough headroom for a shower in the old bathroom.
Before work on the extension could start we had the garden stripped. 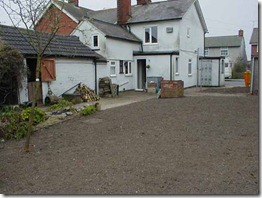 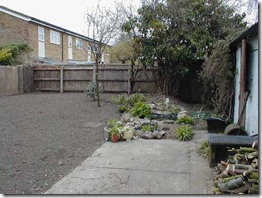 To achieve this we had the wall between the house and the garage removed first to allow easier access to the garden for the mini-digger needed to remove the trees and bushes, and to level the ground. This would also help with creating a clearer area for the builders to work on the new extension. This clearance work was carried out over one weekend, and we went away for the weekend, to return to an empty garden. We actually posted the photos on the internet saying that whilst we were away our garden had been stolen! You would be surprised at how many people believed us, and even offered to bring us new plants and flowers. The trees and bushes were turned into wood chip, and came to 1.5 tonnes!
The next set of photos was taken during construction of the new extension. 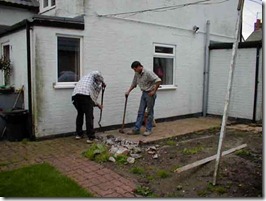 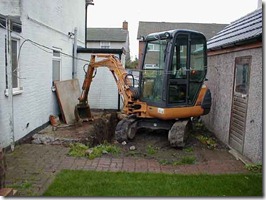 These two photos were the start of the foundations, not much room for the digger to get in the gap, but they managed it. 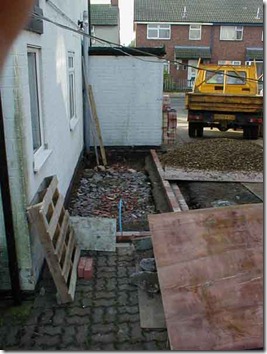 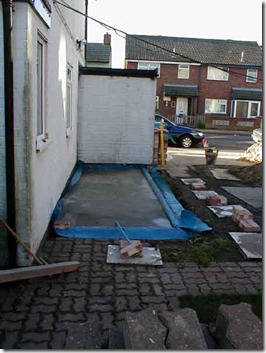 These two were the laying of the foundations. I had specified that these should be adequate to take a further story if a future owner wanted to extend upwards. 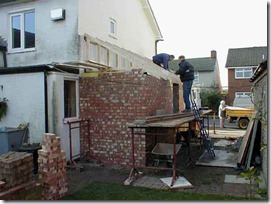 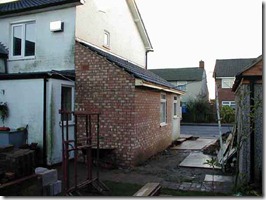 The extension nears completion. Once this was completed Jo and I painted the whole of the outside of the house. We also had new turf laid in the garden. 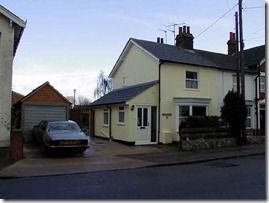 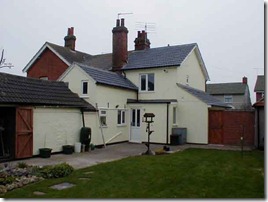 As can be seen from these two photos above, quite a transformation from before the work started. My vision that the new extension with the tiled roof over it and the original lobby looks far more in keeping with the house, rather than the box with a flat roof stuck on the side of the house. The garage has it’s new roof and door. All the roofs have had the original slates replaced, and all the guttering and barge boards and eaves repaired and painted where necessary. The two chimneys were repointed. 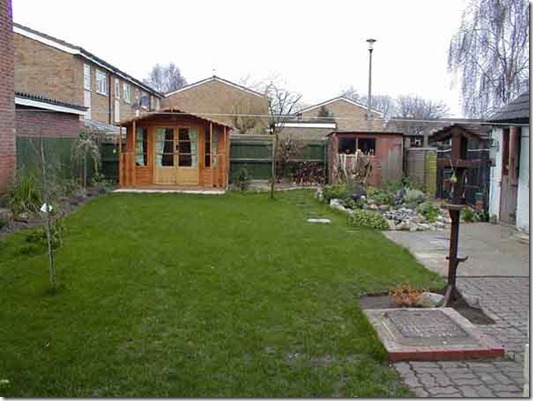 This is the finished garden with the new summerhouse at the bottom of the garden. 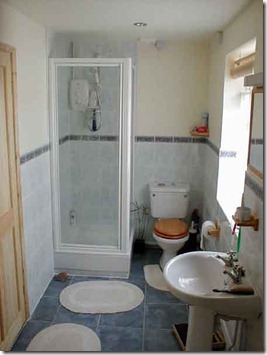 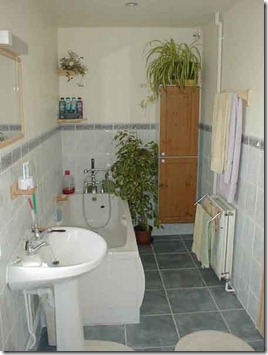 This is the new bathroom installed in the new extension, just a tad larger than the original, with a separate shower cubicle. 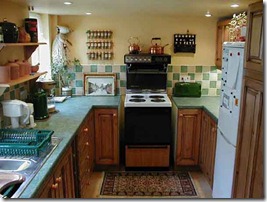 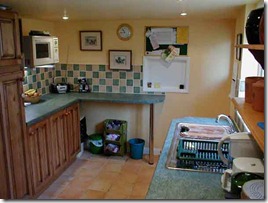 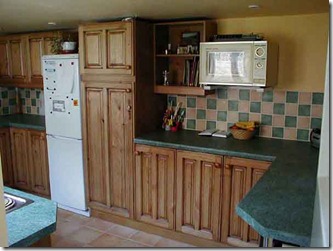 Because the bathroom is now in the new extension this is the new much larger kitchen, more like a kitchen and not a box room. The original kitchen finished at the right-hand side of the tall broom cupboard next to the fridge/freezer.
These last three photos are of the climbing wall I had built and used, which was up the side wall of the stairwell. At the time when I built it there was not a local climbing wall for me to train on, so I built this one. Of course it had to come down to sell the house, and to make way for the new cupboard to hide the boiler and all it’s pipework from sight, which can be seen in the right-hand photo. Of course at that time in my life I was into rock climbing. 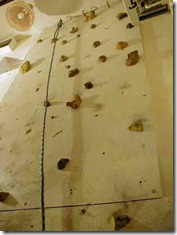 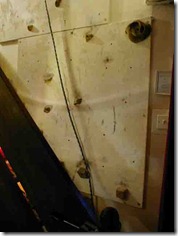 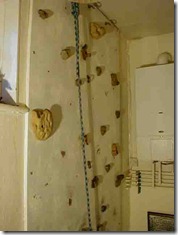 Jo and I had 3 very happy years living in the house after the works were completed until we moved onto “Misty Lady” and consequently “Hadar” and our new life on the canals started. We especially enjoyed the summerhouse, and even slept in it during the summer, very cosy.
Home
Subscribe to: Posts (Atom)